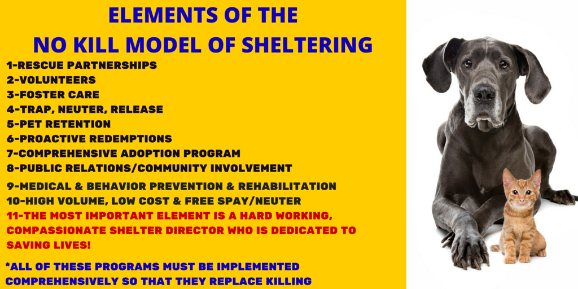 Animals enter shelters for a variety of reasons and with a variety of needs, but for over 100 years, the “solution” has been the same: adopt a few and kill the rest.

The No Kill Equation provides a humane, life-affirming means of responding to every type of animal entering a shelter, and every type of need those animals might have. Some animals entering shelters are "feral" cats.   At traditional shelters, they are killed, but at a No Kill shelter, they are sterilized and released back to their habitats.

Some animals entering shelters are motherless puppies and kittens.  At traditional shelters, these animals are killed as well.  At a No Kill shelter, they are sent into a foster home to provide around-the-clock care until they are eating on their own and old enough to be adopted.

Whatever the situation, the No Kill Equation provides a lifesaving alternative that replaces killing--The No Kill Advocacy Center.