Houston shelters kill roughly 80,000 animals a year. San Antonio, Dallas, Garland and other shelters kill tens of thousands as well. But that number would have plummeted if legislation introduced into the Texas Legislature in 2011 had become law.

The Texas Companion Animal Protection Act (CAPA), H.B. 3450 introduced by Representative Jessica Farrar, required that shelters follow the practices that allowed communities across the country to save 9o% or more of all dogs and cats.

If passed, Texas CAPA would have:

3)   banned “convenience killing” (killing when there are empty cages);

5)   mandated transparency by requiring shelters to report how many animals they kill;.

6)   banned the killing of animals based on arbitrary criteria such as breed, age or color;

Texas CAPA is based on model legislation written by the No Kill Advocacy Center. 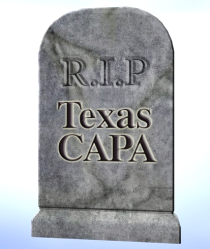 The last day that Texas CAPA aka Hope’s Law could have been set for a hearing was Thursday, May 12th at midnight.  Unfortunately, the only person who could have set the hearing, Rep. Kolkhorst (representing District 13 in Brenham) did not set it.

Instead, Kolkhorst chose to let Texas CAPA die even though well over 5,000 people urged her to support this bill.

Kolkhorst chose to let Texas CAPA die even though the bill was amended to remove her previous proclaimed objections.

Kolkhorst ignored the wishes of thousands of citizens and chose to let Texas CAPA die in the Public Health committee.*

Texas Humane Legislative Network (THLN), (a lobbying organization whose board members include a director of a high kill shelter);

Texas Federation of Animal Care Societies; (a non-profit group whose board members include:

* Sherry Ferguson, director at Houston Humane society, a facility with an 89% kill rate,

Houston Humane Society; (a non-profit facility with an 89% kill rate)

Humane Society of United States (HSUS); (an organization that receives hundreds of millions of dollars in donations from animal lovers but has no shelter and historically fought life saving efforts)

Houston SPCA; (a non-profit facility with a 65% kill rate)

SPCA of Texas, (a kill shelter that appears to have some issues)

and other kill "shelter" apologists who opposed it secretly behind the scenes.

Note:  If you donated to any of the above organizations, your donations were used to fight Texas CAPA.

Because of the above, for the next two years, kill "shelters" in Texas will continue to inhumanely gas animals to death;

they will continue killing animals even when rescuers offer to save them;

they will continue killing dogs that someone claims looks like a Pit Bull;

and the “non-profit” kill shelters will continue to hide their body counts from you.

While we mourn the killing of a law that could have saved many thousands of shelter pets from torture and death in Texas, we also gather our resolve….. because we will be back.  And, we will keep coming back.

No matter how hard the fight or how large the opposition seems, the animals are depending on us... ordinary citizens, animal lovers, no kill advocates and voters... to fight for their lives.

*We called Rep. Kolkhorst's office twice regarding Texas CAPA.  We told her assistant that an article regarding this bill was being written and that readers would assume that she does not care about animal issues since she had not set a hearing.  We offered to let her set the record straight if this was not her reason for killing Texas CAPA.  To date, we have received no response.

Click below to hear No Kill Houston's President, Bett Sundermeyer